Being the second largest city of Maharashtra, Pune is well connected to almost all major Indian cities through railways. There are regular trains to and from different parts of the country that touches the city.

There are three railways stations in Pune, all of which are owned and managed by the Indian Railways. 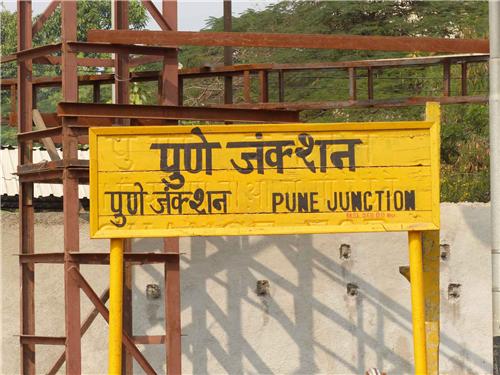 This is the largest railway station in Pune and is located in the central area of the city. Its operations commenced in 1856 with the first train running between Mumbai and Pune. At present, there are more than 125 trains passing from Pune Junction.

Under the high speed rail project of Indian Railways, a bullet train is proposed to be introduced between Pune and Ahmedabad, with Mumbai as one of the stopover destinations.

Some of the trains that originate, pass-by or terminate at Pune Railway Station are as follows:

The current size of main Pune railway station is small as compared to other metros of India. It has only 6 platforms and 8 tracks. Consequently, it does not have sufficient capacity and resources to meet the existing demand of passenger traffic and freight load. A plan to modernize Pune Junction and provide world class amenities to the rail passengers has been under consideration for some time.

The station code of Pune Junction is PUNE.

Shivajinagar Railway Station is important as it is near to the Pune Session Court, College of Engineering, PMC building, etc.

This is another small railway station near the government colony Ghorpuri. It is mostly a halt for six express trains running between few cities of Maharashtra and other states.


Here is a list of the trains that start from or pass through Ghorpuri Railway Station.