One of the most popular Ashrams of India which has recently risen to its fame, is the Osho Ashram, is located in the western region of the country in Pune. This Ashram was established in the year 1974 by the Late Spiritual Guru and Philosopher Osho, after whom the Ashram is named. There is a long story behind the Guru and establishment of this Ashram. Let’s refer to the life story of Guru Osho to discover more details about the famous Ashram. 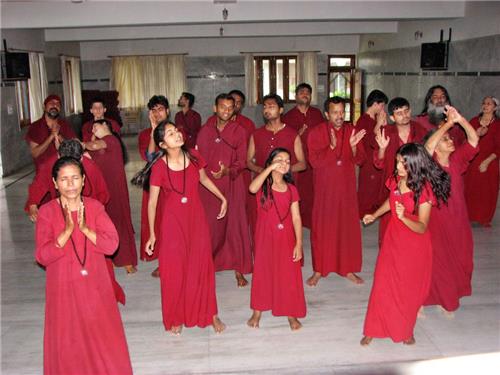 About Osho a.k.a Rajneesh

Osho was originally named Chandra Mohan Jain and lived from 11th December 1931 to 19th January 1990. He was later addressed as Acharya Rajneesh since the 1960s, as Bhagwan Shree Raneesh during the 1970s and throughout the 1980s and finally as Osho since the year 1989 and posthumously. He was into spiritualism, Indian mysticism and public speaking as well as highly respected as a teacher and professor of philosophy. His followers are said to have a lot of faith in his views and beliefs even after his death.

He was a frequent traveler and went around the world lecturing people and his followers about philosophy of life and the strength of spiritualism. He was considered to be very outspoken and gave public speeches without any qualms about the politicians and political situation of India. He is also said to have criticized the views of Mahatma Gandhi and in favor of religious institutionalization making him a very controversial public figure.

It is also believed that Osho had been the centre of controversies due to his open-mindedness associated with human sexuality. In a country where “sex” is considered a taboo, Osho, dared to speak his mind in public about “sex and sexuality” quite openly. Due to this attitude of his and his beliefs, he had managed to earn the title of “sex guru” in a shy country like India as well as by international paparazzi.

During 1970, he decided to settle down in the ‘City of Dreams’ which is Mumbai, where he began his journey as a renowned spiritual Guru in India. During the course of his teachings, he reinterpreted religious writings, philosophical scripts as well as mystics from across the world and not just from India.

He moved to Pune, in the year 1974, which was the permanent abode for Osho Ashram. This Ashram during its initial years attracted primarily foreigners, especially Westerners. The Guru offered therapies and treatments learnt and extracted from the Human Potential Movement to his western disciples. The Ashram came into news due to his sermons, provocative lectures and the Ashram’s permissive attitude.

The Indian government induced a lot of pressure on Osho, which forced him to relocate to the United States in the year 1981. A new international community was established in the USA by his western followers in the name of Rajneespuram near Antelope, Oregan South of Dallas. But unfortunately, the community and its leadership got involved in conflicts and differences over the use of land with the local residents.

The use and purchase of a large number of Rolls Royce cars as a form of gift by his followers for Rajneesh, was highly disliked and criticized by the local residents and local officials. These issues and the revelation that the leaders of the community were involved in a series of criminal offenses led to the dismantling of this commune in the year 1985. His followers were found to have been involved in the bio-terror attack (food contamination) and Osho was arrested for immigration violations. This led to the deportation of Rajneesh from the US and was denied entry across 21 countries and forced him to return to Pune, where he died in 1990.

Following the death of Osho, the Ashram in Pune came to be known as the Osho International Meditation Resort. His followers are now carrying on with his beliefs and teachings which highlight the relevance of meditation, love, awareness, celebrations, creativity, humor and courage. He wanted to emphasize on the importance of these aspects of life as he believed that these qualities were denied to humans due to the prevalence of religious bindings, traditions and social stigmas. He is one of those leaders, whose beliefs became more popular after his death, among the western population as well as new age India. 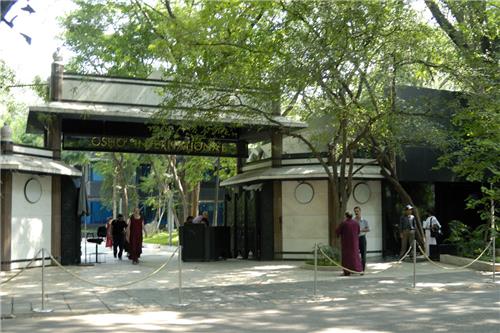 About Osho Ashram in Pune

Established in 1974, the Osho Ashram in Pune, was built on a land in Koregaon Park in Pune, which was acquired by Rajneesh, with the assistance of Maa Yoga Mukta, also known as, Catherine Venizelos-a Greek shipping company heiress. His Ashram covers an area of 2.4 hectares with 2 houses built on it and an enclosed open area of 6 acres which became the centre of his discourses. His lectures were recorded as well as printed so that they could be carried forward for generations and reaching out to a larger population across the world.

The Ashram has an arts and craft centre with different items available for sale including clothes, jewellery, ceramic artifacts and organic cosmetics. The centre also holds dance, music, mime and theater performances. Since 1975, post the arrival of the Human Potential Movement, the ashram began providing complimentary group therapies to those who visited to learn the art of meditation, under the guidance of Rajneesh. These therapies became a massive source of income for the Ashram and had become a major source of attraction foreigners.

This Ashram was specifically established in Pune since the humid weather of Mumbai proved to be quite hazardous for Rajneesh. The weather of this town was ideal for the Guru to recover from a variety of illnesses such as asthma, diabetes and different types of allergies.

The atmosphere of the Ashram was also an element of attraction for the visitors since it always seemed as if there was a carnival going within the vicinity. It was an intense destination always energized and at the same time serene and peaceful. The visitors became active from as early as 6.00 am when the first activity within at the Ashram is initiated in the form of Dynamic Meditation. This is followed by a 1 hour to 1 hour 30 minutes lecture by Rajneesh on religious writing, beliefs and a question and answer session between him and the visitors held in the Buddha Hall of the Ashram at 8.00 am.

Throughout the day, meditation sessions and therapy gatherings took place in the Buddha Field, which is also considered to be the source of energy for the intensity of the therapy and meditation. During the evening, Rajneesh’s disciples, also referred to as Sannyasins, visited the Guru individually in order to inspire the initiation of their Sannyas life or if they wanted to discuss something personally with him. He provided counseling sessions to his disciples in order to help them choose the appropriate form of therapy for a rejuvenating and refreshing experience. 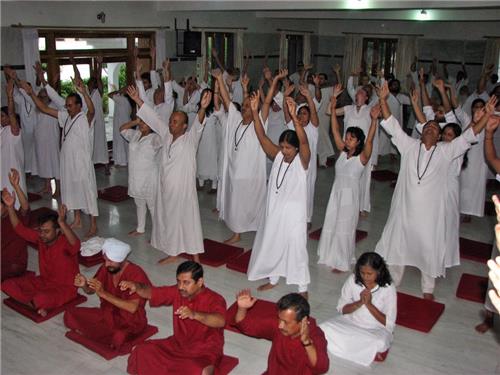 Some of these therapy groups were quite aggressive and experimental in their sessions allowing the release of aggression through physical activities as well as sexual activities. This led to the creation of huge controversy surrounding the Ashram as reports of physical injuries sustained in the encounter-groups were covered by the press. It was discovered that groups allowed the visitors and participants to be violent towards fellow participants to enable the so-called cleansing of the soul.

This discovery was made by a prominent therapist Mr. Dick Price, who was also the co-founder of the Esalen Institute. He himself is said to have abandoned the Ashram after being locked up in a room with participants with wooden weapons, who allegedly broke his arm and severely injured him. The other co-founder of the Esalen Institute, Bernard Gunther, wrote a book on the Pune Ashram, namely ‘Dying for Enlightenment’ including photographs of the meditation and therapy sessions held in the Ashram exposing the violence which ensued there.

The violence within the Ashram was put to a halt in the year 1979, with the issuance of a Press Release from the Ashram stating that violence “had fulfilled its function within the overall context of the ashram as an evolving spiritual commune”. The Sannyasins were said to have learnt their lessons from years of meditation and therapy sessions and were capable of applying their knowledge to work within the Ashram. Life in the Ashram was said to have been modeled on the community designed and led by George Gurdjieff during the 1930s in France.

It induced unpaid hard work with simple lifestyle with supervisors guiding the disciples to lead to self-observation and transcendence. During this period, the Sannyasins were alleged of drug use, adding to the already controversial name of the Ashram. It was also discovered that a handful of westerners, financed facilitation of drug use and even prostitution, ruining the already scarred reputation of the Ashram. Rajneesh was alleged of approving these activities after a discussion with them but was not directly involved in the activities.

By the end of 1970s, the Pune Ashram was not large enough to facilitate the stay of enough visitors who approached the Ashram, which induced the disciples to look for larger areas. But the plans to move could not be implemented due to severe clashes with the Janata Party led by Morarji Desai, even though places were decided upon in the province of Kutch in Gujarat. The government denied approval of land use for the ashram and Visas foreigners, who intended to attend the Ashram, were cancelled. The Desai government also effectively removed the Ashram from the status of tax exemption, driving Rajneesh to pay a lump sum amount of tax amounting to almost 5 million US dollars.

Due to the controversies surrounding the Ashram, even Indira Gandhi dissociated herself with the Ashram in spite of Rajneesh having close ties with the Indian National Congress Party, during the 1980s. Even an attempt of assassination was made on Rajneesh during this period by a Hindu fundamentalist named Vilas Tupe, as he believed him to be a CIA agent. By the year 1981, almost 30,000 visitors attended the Ashram, of which, most were of American or European origin. During this year itself, after delivering hours of unwanted lectures, for 15 long years, Rajneesh, entered into a mode of self-inflicted public silence for 3 years. It is at this time that Maa Yoga Laxmi, was replaced by Maa Anand Sheela (Sheela Silverman) as Osho’s secretary.

After this he was moved to the US due to his deteriorating health conditions, but returned to Pune again after facing conflicts around his Ashram in Oregon. Following this, he passed away in the year 1990 at the age of 58 as the weather conditions in India were not suitable for him.

The Pune Ashram still runs the way he intended it to run with the help of his teachings and recorded lectures. It may not seem like a great place to visit for those who do not believe in the policies and theories of Osho. But those who are interested can definitely go and take a look at one of the most controversial religious destinations of the world.