Media plays an important role in Maharashtra’s second largest city, Pune. The vibrant and eventful city witnesses some major events and news all-day-long, keeping the media on their toes every minute. Pune has always been acknowledged as a culturally conscious and academically active city, making it produce some extremely popular and poignant magazines and newspaper written in Marathi, Hindi and English. Print, television and radio houses are also widespread in Pune. Adding to the media house list are the very modern super-fast internet connectivity that has made lives simpler, easier and the world smaller. 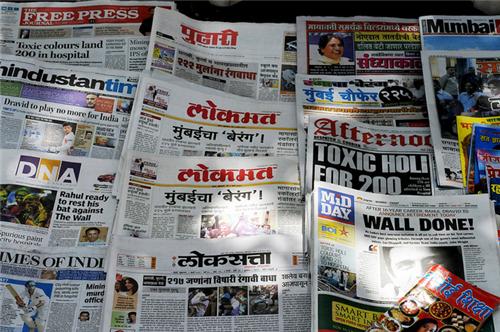 Let’s have a look at the chronological evolution of media in Pune:

Prior to India’s independence, Maharashtra or Bombay Province as it was then known was politically a very active state. Maharashtrians loved to participate and express their opinions on the prevalent political situation of the region. And for this very reason, the residents of the province took full use of the print medium, that was the most popular and only mode for voicing their opinions.

The first newspaper Darpan was published in the region on January 6, 1832 by Balshashtri Jambhekar. The content was published both in Marathi and English and was circulated all over the province. This was the first taste of newspaper that the Punekars received. The paper issued its last edition in 1840. Next it was freedom fighter Bal Gangadhar Tilak who started two papers in 1881 – Kesari in Marathi and Maratha in English. These two papers played a vital role in arousing political sentiments and unity among the countrymen. Since the headquarter of these two papers was in Pune, the city soon became the hub of political activists.

Post independent a number of Marathi newspapers came into existence and Punekars got an opportunity to enjoy the news coming from various sources. Contemporary Marathi magazines like Mayaboli, Saptahik Sakal, Sahitya Chaprak and Lokprabha provide some poignant reads for magazine readers.

Contemporary national English dailies like the Times of India, Indian Express, Pune Times, Mid Day, Maharashtra Times and Maharashtra Herald have their bureaus in Pune. News agencies like UNI and PTI also have their base in the city.

The first satellite channel to enter into the regions of Pune was Doordarshan’s Marathi Regional Programme Channel on August 9, 1986 with a terrestrial transmitter in Bombay. Later on August 15, 1994 Doordarshan Sahyadri was launched with a base station in Pune. Later on various Marathi channels like Zee Marathi, ETV Marathi, Mi Marathi came up. A host of hindi channels like Star Plus, Zee TV, Sony also started their telecast. From the beginning of 21st century, television media brought along a new wave of 24X7 news channels. All these channels like Star Majha, IBN Lokmat, TV9 Maharashtra, Zee 24 Taas have their offices in Pune.

All India Radio started its service in Pune from October 2, 1952. Radio faced a stiff competition from television and print media and it was only after the privatization of radio broadcasting sectors in 2000 that radio got its second lease of life. Today there are numerous radio channels like Radio Mirchi, Red FM, Radio City 91.1 FM, Radio FTII that keep listeners glued to the radio channels.

The Software Technology Parks of India (STPI) located in Pune were the first to receive internet connectivity in the region. By the end of the 20th century, Videsh Sanchar Nigam Limited introduced the “dial-up” connection that made internet accessible in every household having telephone facility. This also led to the booming of cyber-cafe business in the city.

In present day, with the advent of Wi-Fi technology, internet and new media has become an indispensable part of our lives. According to surveys, Pune today stands among the top four cities in India executing maximum e-commerce. Pune is also way ahead of many Indian cities in terms of social media. The city teens have topped the country as social networking site users. Today's youth have taken the social media as a platform to voice their social, cultural and political opinions. A constant exchange and share of information  on various ideas and issues on social media are keeping the Punekar teens busy. Thanks to the wide viewership of these blogs and micro-blogs, even the government have started taking interest on these blog posts.