Kothrud was known as Kothrud Baug during the period of the Peshwas. It is a suburb in the western part of Pune which has only recently started developing but has already become one of the most developed suburbs in the Asian continent since the 80s. Kothrud is significant historically, and Peshwa Bajirao’s second wife, Mastani used to live here. Other old landmarks in Kothrud which are popular include the Mrityunjaya Temple and the Dashbhuja Temple and with records going as far back as to the times of the Peshwas. The first flyover in Pune was also built here. It is called the Savarakar flyover at Paud Phata and connects Karve Road to Paud Road. 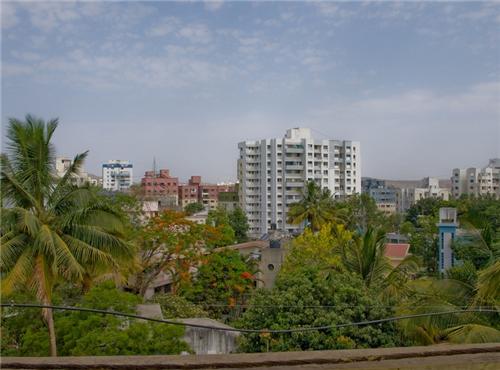 This area is divided demographically between the native Maharashtrians and students from all over India who prefer Kothrud for its relative low-cost housing and the presence of colleges like MIT and Cummins. The demographics of Kothrud show all the distinctive features of a flourishing Indian conurbation. Known to have the largest student population in Pune, with students pouring in from all over India, Asia and Africa, the economy of the area is mainly dependent on them. Kothrud, although is now developing in to one of the upmarket areas of Pune, with real estate prices steadily increasing. Known as a pensioner’s paradise, Kothrud’s real estate boom has seen it become a pulsating locality.

The culture of Kothrud is an amalgamation of the large student population from different parts of the country as well as students from the Asian sub-continent and Africa. A large number of cyber cafes dot Kothrud which assist innumerable students and the residents. The short-lived and sizable student population in Pune is the cause of this. This very factor is also responsible for giving momentum to the growth to STD and ISD booths which have almost disappeared from the rest of urban India.

Kothrud is a township mainly on Karve Road and Paud Road. Kothrud can be easily reached from any other part of Pune city and its neighbouring regions. There is a Kothrud bus stand and Kothrud bus depot. There are regular PMPML buses running between Kothrud and Deccan Gymkhana. Buses also connect Kothrud to other areas like Hadapsar and back.

Kothrud also plays host to a decent number of information technology companies contributing to Pune’s reputation of being an IT Hub like Synise Technologies, Harbinger Systems and Harbinger Knowledge Products. It is also home to the manufacturing plant run by Cummins India, who are one of the largest manufacturers of machines like engines and is also home to some small scale manufacturing plants which are operated by the Kirloskar Group.

Like everything else in this locality, the presence of students has given rise to multiplexes and auditoriums for the purpose of entertainment. City Pride Kothrud and the Yashwantrao Chavan Natya Gruha are fairly popular. For shopping one can visit a Big Bazaar or a Croma outlet also located here. Kothrud even has bus stand outlets that double up as convenience stores.

With the kind of amenities available here, Kothrud is definitely the place to live in, especially if one plans to live here for an extended period of time.