Forts In And Near Pune

The beautiful forts in Pune make the city one of the most sought-after tourist destinations in India. Located just a few miles away from the main city, the forts in Pune are mostly situated at the top of the Sahyadri Mountain. It not only gives you a breathtaking view of the range but the old yet sturdy forts transport you to the Maharaja Era. Here's a complete list of forts you must visit on your trip to Pune. 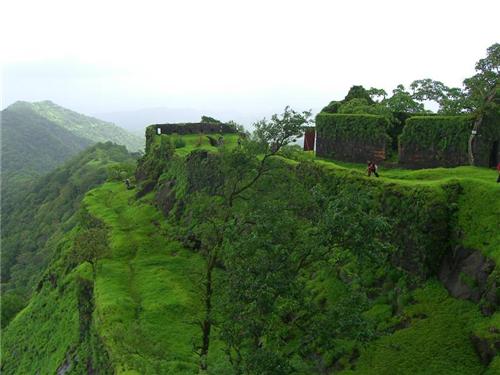 Fort Karnala is situated in Raigad district of Maharashtra and is about 125 km away from Pune. Karnala is a hill fort and has been converted to Karnala Bird Sanctuary by Indian government. The Fort is approximately 1,500 feet above sea-level and is a favourite spot for trekkers.
Ticket charges – Rs 50 per adult and Rs 20 per child.

How to reach Fort Karnala near Pune

The best way to travel to Karnala is by road from Pune. It takes approximately 2 hours to reach Karnala.

There are no direct trains to Karnala. The trains halt at Panvel which is 10 km away from Karnala Fort. From Panvel one can hire a cab to reach to the Karnala Fort. Pune-Manmad Express departs from Pune Junction at 11.45 am and reaches Panvel at 2.15 pm. It runs every day. Pune Ers Super Express departs from Pune Junction at 6.45 pm and reaches Panvel at 9.20 pm.
There are no direct flights to Panvel. The nearest airport to the Fort is in Gwalior.

Fort Korigad is a hill fort and is situated 20 km away from Lonavala in Pune district. The Fort is 3,050 feet above sea-level and is considered as an ideal location for novice trekkers. The major attractions of Fort Korigad are its two caves and large ponds. Perfect time to visit Fort Korigad is during winter.

How to reach Fort Korigad

The best way to reach the Fort is by road. There are two routes, one through Ambavane village and another via Lonavala, Pune. 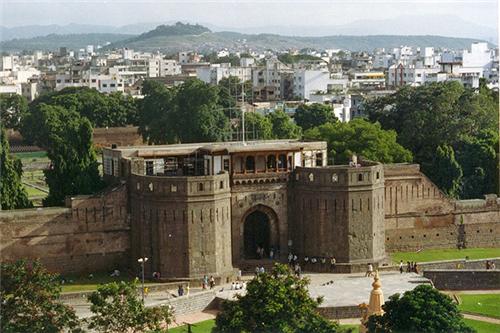 Located within Pune city, Shaniwar Wada is a palace fort which was established in 1746 by the rulers of Peshawar. A light and sound show in evenings is one of the main attractions of Shaniwar Wada in Pune. Ticket rate for the show is Rs 25 per person.

Sinhagad Fort is situated at a distance of 25 km from Pune. The Fort, which means lion’s den, is historically significant. Several important battles have been fought in the Fort since 14th century.

How to reach Sinhagad Fort

If you want to enjoy a hassle-free journey, catch a PMPL bus number 50 from Shaniwar Wada, Pune. It will take you directly to Sinhagad Fort in Pune.

Situated at the hill top of Bhorapya, Pratapgarh Fort in Pune was built by Shivaji during 17th century. One of the most interesting features of the Fort is its double-lined walls on all its sides. Pratapgarh Fort is 142 km away from Pune. 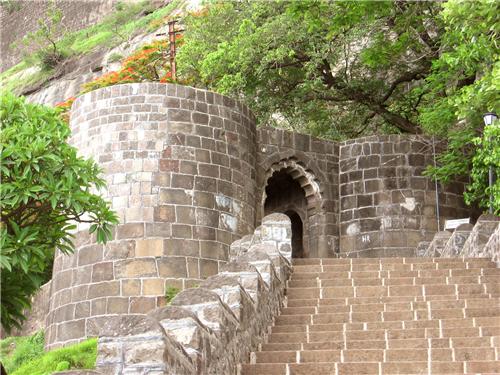 This fort is one of the major attractions in Maharastra as Shivneri is the birthplace of legendary Maratha king Shivaji.

How to reach Shivneri Fort

There are several buses from Swargate and Shivaji Nagar in Pune to Junnar. The fort is 2 km from Junnar. You can either walk or take an auto to the Fort.

Raigad Fort is 50 km away from Pune and is a very important tourist spot around Pune city. This Fort is historically significant as Maratha warrior Shivaji established his capital kingdom on this Fort.

How to reach Raigad Fort

The best way to reach Raigad Fort is by road. Maharashtra State Transport buses are available in Pune that will directly take you to the Fort. The bus leaves at 5.30 am from the Mahad ST Bus Depot Pune.

Torna Fort, also known as Prachandagad Fort in Pune, is the highest fort in Pune district. The fort is located 1,403 above sea-level.

How to reach Torna Fort

To get to the fort one has to first reach Velhe, the base village of Torna in Pune. From Velhe it takes around 3 hours on foot to reach the summit of the Fort. Buses are available from Swargate, Pune at 6.30 am.

Apart from these forts, there are other significant forts in the vicinity of Pune. Here's a list of other forts near Pune worth visiting:
Fort Visapur Pune
Distance from Pune: 58 km