Dance and Music Festivals in Pune

Pune hosts some important dance festivals of Maharashtra that attract hundreds of people from all over the state.

Pune is best known for its Shaniwarwada Dance Festival, which is organized every year and is a great hit among Punekars. The festival gets its name from Shaniwarwada Fort, which was the main center of Peshwa dynasty during the rule of the Maraths. Eminent personalities from the field of dance, music and drama grace this occasion with their breathtaking performances on the grandiose sets created in an open air venue against the backdrop of Shaniwarwada Fort. It is also a noted platform for budding talents from India and other countries. The entire ambience takes you to a magical journey into the world of dance and music.

Shaniwarwada Dance Festival in Pune was originally started to promote the dance culture in the city but today it has marked its presence on cultural event calendar as a festival to celebrate the fusion of dance, music and glorious history of Pune. The classical dance still reigns supreme in this two-day festival but the changing tastes of people paved the way for introduction of the modern dance forms such as jazz and salsa performances.

Sawai Gandharva Music Festival is the biggest annual music event held in Pune exclusively for classical music enthusiasts. It was renamed as Sawai Gandharva Bhimsen Mahotsav in 2012 after the death of legendary music personality and Bharat Ratna awardee Pt. Bhimsen Joshi, who was responsible for initiating this festival in 1953.

As one of the most noted and popular cultural events in the music world Sawai Gandharva Music Festival attracts both young talents as well as prominent celebrities from India and other countries. This festival mainly focuses on the Indian classical music forms like Hindustani classical, ghazals, qawwalis, instrumentals, carnatic classical etc.

The first performance of Sawai Gandharva Music Festival marks the debut of a budding musician which is followed by vocal and instrumental performances by other renowned artistes. The music lovers have had the pleasure of listening to noted music magnets like Pt Hariprasad Chaurasia, Ustad Amjad Ali Khan, Pt Jasraj and many more.

Customarily organized for three days, Sawai Gandharva Bhimsen Mahotsav was held for six consecutive days in 2012 in Pune, being its 60th anniversary. 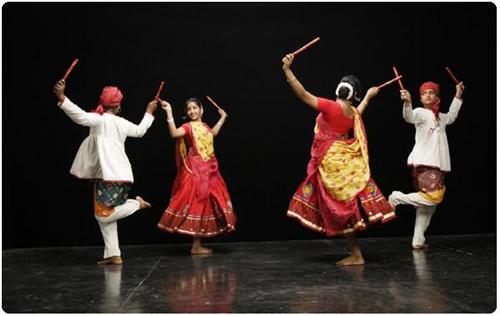 Navratri is a nine day Gujarati dance festival to worship Goddess Durga and her nine forms. Since Pune is a cosmopolitan city with people from various communities residing here, Navratri is celebrated with equal enthusiasm as other local festivals. While Gujaratis rejoice playing garba and dandiya ras dances during Navratri, Bengalis celebrate it as the Durga Mahotsav, where the idols of Goddess Durga are worshipped for nine days.

Navratri Utsav held at Chaturshringi Temple is the biggest Navrati event in Pune with the residents participating in large numbers from different parts of the city. The ceremony and rituals are performed in the traditional way before the dance programme begins. Navratri in Pune truly characterizes dance, music, euphoria, devotion and food in their best elements.

Explore more about Culture of Pune