Baramati is a small township and municipal council located in Pune district of Maharashtra. Significant for its historical and agricultural importance, Baramati is on its way to become one of the most important agricultural hubs of Western India. Located at a distance of 105.9 km from Pune city, the tiny hamlet is fast becoming a popular destination for agri and eco tourism.


Historically governed by Yadavas of Devgiri region, Baramati was gifted to Malojiraje Bhosle, the grandfather of legendery Maratha ruler Chhatrapati Shivaji in 1603 by Nijam Shah. That’s how the small town came under Maratha rule. Sometime around 1745 the administration of Baramati was handed over to Babuji Naik. During his rule the city prospered and made significant development in arts and crafts.

Today the town is a popular destination for tourists visiting this part of the country. While one can visit the two ancient temples situated here, the residence of Babuji Naik is also of great historical importance. The two temples Sri Kasivisheveshwara Temple and Sri Siddeshwar Temple are highly revered in this region. While the Kasivisheveshwara Temple is located on the west bank of the river, the Siddeshwar Temple which is an architectural wonder is situated on the east bank of the river. A large number of devotees as well as tourists visit these temples throughout the year. The palace of Babuji Naik is also open for the visitors. A fine example of splendid architecture, the house has a gigantic idol of Nandi, the bull vaahana (Carrier) of Lord Shiva in its premises. Shree Moreshwar Temple is another popular attraction of Baramati. Dedicated to Lord Ganesha, the structure of the temple resembles a peacock.

Being an agricultural hub, Baramati produces significant amount of sugarcane, grapes, jawari, cotton and wheat. In fact the town is a leading exporter of sugar and grapes. Based on this huge agricultural development a unique kind of tourism has developed here. Known as eco and agri-tourism, this kind of tours let the visitors see the vast fields where crops are produced. Based on the natural resource of Baramati, agri-tourism provides an opportunity to the tourists to witness the simple lifestyle of agriculture oriented ethnic India. Hugely popular among urban population and foreigners, eco tourism brings a large number of visitors to Baramati.

The small town is also known for its various reputed educational organisations. While the city houses prominent institutions imparting education in the fields of Agriculture, Law, Engineering and Biotechnology, a medical college is on its way to get established. 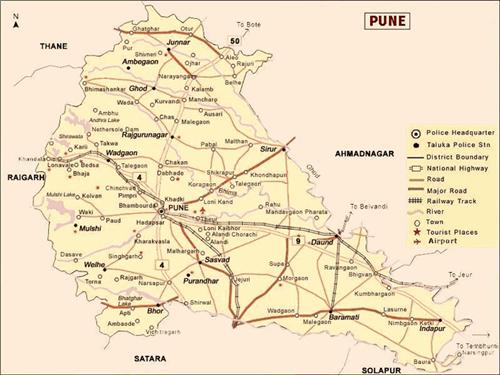 Baramati generally experiences dry climate with three main seasons; summer, monsoon and winter. March, April and May are the summer months when the weather is generally dry and very hot. The temperature this time stays around 30 degree Celsius and sometime even crosses 40 degree Celsius. June to September are the monsoon months. The city receives very little rainfall, though the temperature drops significantly during this period. The most pleasant time to visit the city is during October and November which can be termed as post-monsoon season. During this time the weather stays comfortable with low temperature. Winter falls from December to February. Baramati experiences a mild winter with temperature resting between 25 degree to 10 degree Celsius.