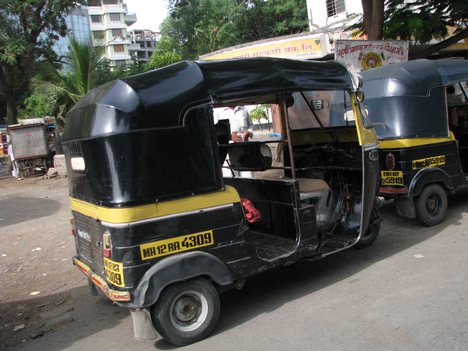 Autos are the most common mode of public transport in Pune. You can find autos in every nook and corner of any area and also outside the railway stations, airport and bus stands in Pune.
Earlier, the Regional Transport Authority of Pune had started a prepaid auto services outside bus stands, airport and Pune railway station. However, it was not successful and was discontinued. In 2012, this service was restarted, whereby a prepaid auto rickshaw booth was installed outside the railway stations and airport. Once again, this service is under scanner due to the lack of co-ordination between RTO, airport and railway authorities.

There are also shared auto rides available for the commuters travelling frequently between distances of 1 to 6 kms. The shared rides are charged per passenger and are quite cheap than the regular autos.

Punekars also use six-seater autos, which are easily available in the city. Six-seater autos in Pune are a great alternative for those who don’t want to use PMT and PCMT bus services. Usually these autos run outside the main city along few designated routes. The fare for six-seater autos is almost the same as bus fares in Pune.

As per the tariff card effective from November 2011 and published on the website Regional Transport Office (RTO) of Pune, the auto fare in Pune should be calculated as per the following formula:

If you are taking an auto ride in the midnight, you will generally have to pay 50% additional charge or half return charges. The waiting charges are extra in case you make an auto driver wait before or during the journey. It is advisable to ask the auto rickshaw driver to set his meter reading to zero before you start your ride, confirm if he is carrying the latest tariff card and then pay accordingly.

For prepaid autos in Pune, the commuter has to pay 20% above the actual fare and Rs 5 as the service charge to the prepaid booth.


For Shared Autos in Pune

The shared auto fares are more or less same across the other areas of the city.

If you want to make a suggestion or lodge a complaint against any auto rickshaw driver in Pune, dial the toll free number 1800 2330012.

You can also lodge auto complaint through SMS. Type complaint and send it to 59994:
The complaint detail in your SMS should be brief. For example, refuse to ply/demand excess fare/arrogant behaviour.

Other numbers for auto complaint Pune are:

Now, you can also book auto rickshaws in advance through professional auto rental companies in Pune. These companies work on similar lines as the car rental agencies, whereby you can call up an auto rental company, book an auto in Pune and get details via sms. Here are few such companies:

The auto drivers in Pune are known to be quite rude and unaccommodating. They offer service as per their convenience and may refuse to give you a ride. In spite of a well-defined standard tariff structure, they usually charge exorbitantly for going from one place to another. The local residents are in better position to negotiate or argue with the auto rickshaw drivers but it is the tourists who often suffer and feel cheated during their visit to Pune. So always carry a Pune auto fare card with you.